Update: fail-Way gets a new accelerometer

I was walking around Fry's and I spotted a Nyko-brand nunchuck for $9 so I picked it up. Testing showed that the nunchuck worked, so I proceeded to open it up. This secific nunchuck had a vibration feature, so there was a small pager motor, as well as some additional circuitry for controlling the motor. 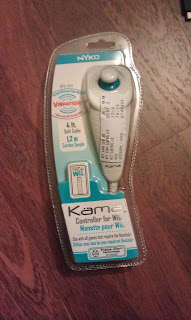 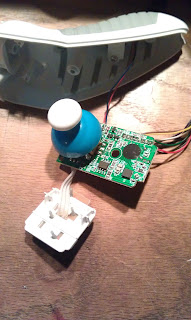 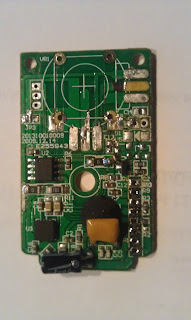 After confirming that it worked, I figured I would try to minimize things, and since I wouldn't be using the joystick portion, I removed it. Unfortunately, the process of doing that resulted in the loss of some SMD components, and the Nyko board stopped functioning correctly. It's not totally broken, as the accelerometer still reports data, it's just very slow and unresponsive at times now. There goes $9. (I did salvage the two buttons, the motor, and the joystick, so I guess it's not a total loss)

Yesterday I was browsing Radioshack and saw a Gigaware-brand (Radioshack's brand or something like that) nunchuck on clearance for $8: even better, if it worked. Tearing into that one showed an even simpler construction, with less wires. After testing that the connector worked, I de-soldered the wires from the board to directly connect my WMP board to the NK board. Luckily the board has convenient labels to show which pad is which. 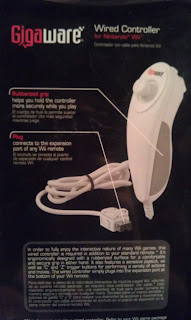 At first, I was worried because now neither device was responding. After double checking power and data connections, I logically figured out the problem was switched SCL and SDA lines. What had thrown me off was the fact that the Gigaware nunchuck board is mislabeled, with those two lines switched. I did get it working in the end, though. 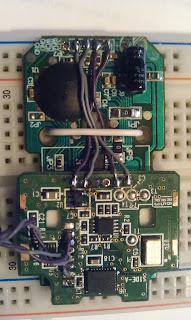 Now I have a nice and tidy sensor package with convenient mounting holes, ready to be put into use. As a bonous I also get 4 buttons and two 2-axis joysticks. 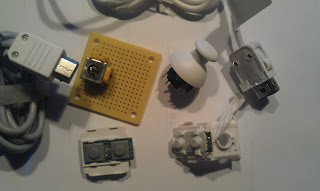